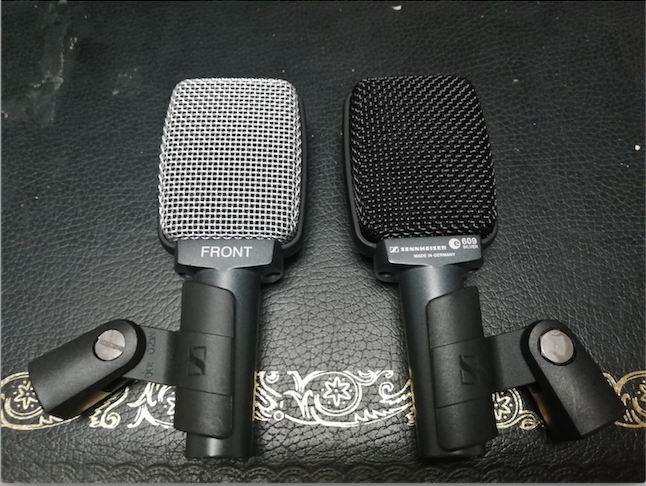 Hopefully you are all now fully aware of how this works. Each week we will be featuring another of the mics in our collection and giving you a little information along with our opinions on them.

Since its release the SM57 was the standard mic for guitar cabs in studio and live work. With the release of the Sennheiser e609 a rival was born. Designed specifically for guitar cabs, the e609 has a similar frequency range (reports range from 40hz-15khz to 40hz-18khz…if you care, use an oscilloscope and test yours!) and frequency response but has a supercardioid pattern as opposed to the cardioid pattern of the 57. Due to its design you can get the capsule just as close to the source but this is slightly better at rejecting surrounding noise. In a live setting, such as a pub or small club, the difference between these mics is negligible. The chances of getting a guitarist to keep their amp quiet enough where the PA is doing the work is a an age old battle that you won’t win and isn’t worth the argument. However, putting one of these in front of their cab can often pique their interest enough to convince them that you know what you’re doing. When you are able to isolate the cab from the front of house mix you’ll find that the 609 can handle higher SPLs, has a slightly cleaner low end response and a more defined high end with distorted tones. A lot of people suggest that you don’t need to use EQ with this mic but the most important tools when deciding on that are the weird looking lumpy things on the side of your head. The 609’s flat design has led to people wrapping the mic cable around the handle and draping the mic over the front, very useful in confined spaces such as a orchestra pit, just make sure you have it facing the right way! A stand is always better though, cables should be treated with respect as they are often the weakest part in the signal chain and are often the first to develop a fault due to rough treatment.

Like all mics, you do not have to be limited to using it for one purpose. Others have used it for vocals, drums and woodwind but it makes sense to keep this for what it was intended for.

One last thing on guitar amps. Every guitarist will tell you that their amp only sounds good if its loud. Unless you are using valves this just isn’t the case, transistors don’t like being abused in the same way. If you need your amp to be cranked to its limit then get a less powerful amp and let the PA do the work for you. EVERYONE will thank you for it and you can go back to feeling like a rock God.