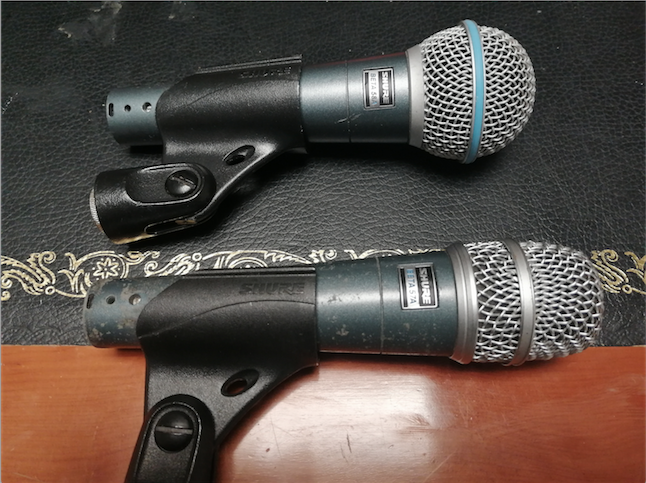 Next on our list of microphones follows on nicely from our previous post and are the Sure Beta58 and Sure Beta57. First off, Beta DOES NOT MEAN BETTER! This is such a common discussion but it shows a complete misunderstanding.

The first fundamental difference between an SM58 and Beta58 is the polar response pattern. Simply put, this is how much the sound changes as the mic turns from the sound. As a singer moves from directly in front of the mic to the side of the mic the volume will change dramatically, much more so than with an SM58. There is a slightly larger presence boost and at a slightly higher frequency and appears that it does not have as pronounced proximity effect – based on our opinion. With a slight boost in output, this would be a great microphone for anyone with a quieter, more subtle voice. It can tend to lead to a slightly more brittle sound but this can be useful to make your vocal cut through over the top of a loud band.

Similarly, the first fundamental difference between a Beta57 and a SM57 is the response pattern from a cardioid in the SM57 to a hyper cardioid in the Beta. This makes the mic better at reducing unwanted noise from other instruments and so again makes it useful for noisy stages. It also has a similar frequency response to the Beta 58 and so has a slightly crisper top end. This is a mic we almost always use on flutes and whistles to keep the delicacy of the breath at the top of the frequency range while keeping the warmth at the bottom. Any mic that has added resistance to feedback is good and so with this likely to be pointed down at the flute, rejecting feedback is a very important trait. Rejecting feedback is, of course, one of the fundamental requirements of good sound and should never be tolerated.